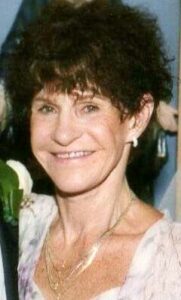 Charlotte was born December 17, 1941, in Upper Darby, PA to Laura Lyons Goodwin and Edward George Goodman, raised in the Frankford section of Phila and graduated Frankford HS in 1960. In 1961 she married Carl V Mazzeo and raised their 3 children. Later married Andy Markee widower of her best friend Catherine “Tootsie” Simmler and raised their 11 kids along with her own. Andy and Char purchased the Ocean-11 Motel in North Wildwood in 1985, a dream fulfilled of living at the shore, which is still owned and operated by the Markee/Mazzeo children. Char did a lot behind the scenes besides being a loving and loyal person and mom. She loved country dancing, dabbled in ceramics, was a great artist, had a green thumb and oh what a cook: she never lacked in talent. Passionately volunteered for many years at the rescue shelters with the cats and dogs, in addition she and her friend Joann often gave up their holidays to dish out dinners to the less fortunate and loved doing it. She worked the polls every election day for many years in Phila and NJ. Everyone who met her loved her, it was so easy. Charlotte had a good life, a lot of love around her and was very well taken care of by her family and friends.

In lieu of flowers, Donations can be made to: Cape May County Animal Welfare, c/o Monica Dabrowski Sopuch, 40 Route 47 South, Cape May Court House, New Jersey 0820

A Memorial Service will be held at a later date for Relatives and Friends.